This historic Site, located in Bartlett, includes the oldest home in Shelby County open to the public, thirty-two acres of surrounding land, and numerous outbuildings. These outbuildings include a former sharecropper's cabin, a restored commissary, and two nineteenth-century frontier-style cabins relocated to Davies Manor in 2006. Additionally, the property contains several gardens and an arboretum walking trail. Our current interpretive program consists of docent-led tours of the log home, a permanent exhibit on the history of slavery and sharecropping at Davies Plantation, and a self-guided walking tour of the grounds and outbuildings.

1975 – The Manor house was placed on the National Register of Historic Places.

1976 – A Century Farm Certificate was awarded by the Tennessee Department of Agriculture, recognizing that the same family owned and operated the land as a farm for one hundred years or more.

1998 – Davies Manor received a Certificate of Merit from the Tennessee Historical Commission for “having made significant contributions to the preservation of the historical and architectural history of Tennessee.”

May 1998 – Davies Manor was certified by the National Wildlife Federation. The historic site and surrounding acreage is an official Backyard Wildlife Habitat, “providing the four basic habitat elements needed for wildlife to thrive: food, water, cover, and places to raise young.”

Davies Manor has received the Memphis Heritage Anna Stoner Award for preservation of a rural environment in an urban setting.’

Davies Manor is currently closed for the winter season.

Davies Manor Historic Site is open seasonally from the beginning of April until mid-December. Normal museum operating hours are from 12 p.m. To 4 p.m., Tuesday through Saturday. The last tour begins at 3:30 p.m. Regular tours through the house museum are docent-led but you may browse at your leisure if you prefer. For groups of ten or more, please call the office to make arrangements. The Davies Manor Quilt and Fiber Arts Show is coming up! Antique and modern quilts will be on display in both the event hall Hillwood and the Manor house. The special exhibit, Inspired by Endangered Species, is a collection of 182 quilts curated by nationally renowned quilter Donna DeSoto. If you are interested in submitting a quilt to the Davies Manor Quilt Show, please drop off your quilt on Tuesday November 1st or Wednesday November 2nd from 10-4 with this form. Admission is $10. Come see the quilts, browse the vendors, and enjoy a day at Davies Manor! 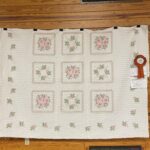 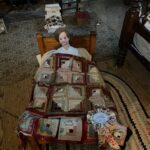 Signs explaining major facts and artifacts sit in each room for those who do not want a guided tour.